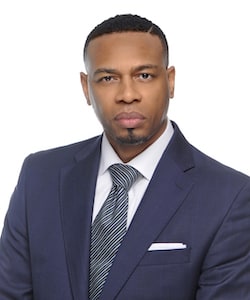 Marlon A. Onias is a Veteran of the U.S. Coast Guard, and former police detective. Originally from New York City Mr. Onias joined the U.S. Coast Guard as a symbol of servant hood, giving back to his country. While serving he obtained his Bachelors in Criminology from Saint Leo University. Upon his completion of service he joined the Newport News Police Department where he worked diligently, and vigorously to combat crime in the City's lower east end. As a police officer, he became one of the youngest detectives on the department before moving on to attend Florida Agricultural & Mechanical University College of Law. Mr. Onias now serves as a civil litigator, focusing on employment, business, and trusts and estate matter. Serving clients locally, regionally, and on a national level.

Contact Us
Practice Areas
Client Reviews
★★★★★
Mr. Frank Lago provided legal counsel services for me to help review advisory agreements and in the creation release forms. Frank clearly explained any areas that I did not understand and provided excellent service. It was a pleasure to work with him and I look forward to engaging with him in the future. R. J.
★★★★★
My business partner and I are new small business owners. Legal aspects of business can be daunting, but from the first time we spoke to Frank, we knew that he not only was incredibly knowledgeable and professional, but also had our best interest in mind. We have been working with Frank for over a year and we could not be any more pleased with his level of expertise, his timeliness, his overall demeanor, and his ability to answer and clarify all of our questions and take care of all of our business needs. Frank is approachable, dedicated and most of all authentic. C.H.
★★★★★
Frank is very professional and thorough! Great experience and highly recommend him. D.S.
View More
Submit a Law Firm Client Review